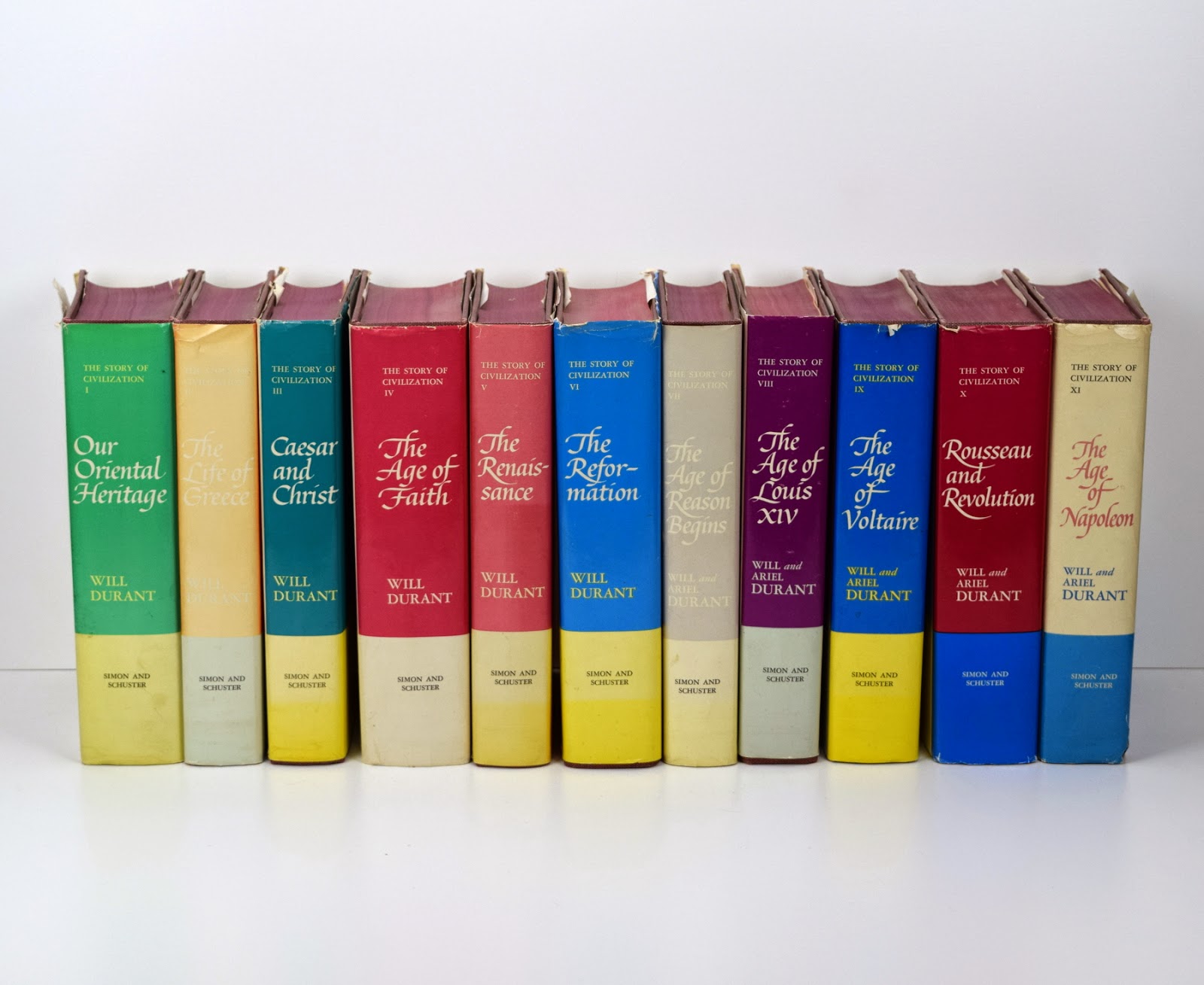 The Story of Civilization

Oh my. Can you imagine? Taking on such an endeavor? Will Durant and his wife Ariel wrote this 11 volume set that covers general Western history. This determined duo spent over FOUR decades working on it. Although Mr Durant intended to get to the early 20th century, the series stops at The Age of Napoleon. Still an amazing feat. Or an “immodest” and “absurd enterprise”, as Will himself described it in the intro to his first volume:
“I wish to tell as much as I can, in as little space as I can, of the contributions that genius and labor have made to the cultural heritage of mankind – to chronicle and contemplate, in their causes, character and effects, the advances of invention, the varieties of economic organization, the experiments in government, the aspirations of religion, the mutations of morals and manners, the masterpieces of literature, the development of science, the wisdom of philosophy, and the achievements of art. I do not need to be told how absurd this enterprise is, nor how immodest is its very conception … Nevertheless I have dreamed that despite the many errors inevitable in this undertaking, it may be of some use to those upon whom the passion for philosophy has laid the compulsion to try to see things whole, to pursue perspective, unity and time, as well as to seek them through science in space. … Like philosophy, such a venture [as the creation of these 11 volumes] has no rational excuse, and is at best but a brave stupidity; but let us hope that, like philosophy, it will always lure some rash spirits into its fatal depths.”

I found this set this past week at a thrift store and I debated getting it. I know, I know…I have no idea why. Maybe because it’s big. And weighs 40 pounds and takes up a lot of space. But I knew it was worth more. (More about how I knew in a minute) So I switched out the basket I was carrying for a full on cart and went back and loaded up. I felt somewhat better at checkout when the guy behind me was practically drooling and asking me where I had gotten them and if there were more and how much they cost and how they were exactly what he was looking for…yada yada. (always a good sign).
I almost felt sorry for the guy but then I thought…who knows? Maybe he was a reseller too and had had people cave in before under the pressure. My NY-raised trained method of mostly ignoring while smiling with my mouth only (no eyes, never the eyes!) stood me in good stead and he took a step back. 🙂
So anyway…back to how I knew this Story of Civilization set was worth picking up. While I agree there is a plethora of free information about what sells on Ebay and Amazon and Etsy (way more available than when I began this adventure) I have no problem spending money on information as well. 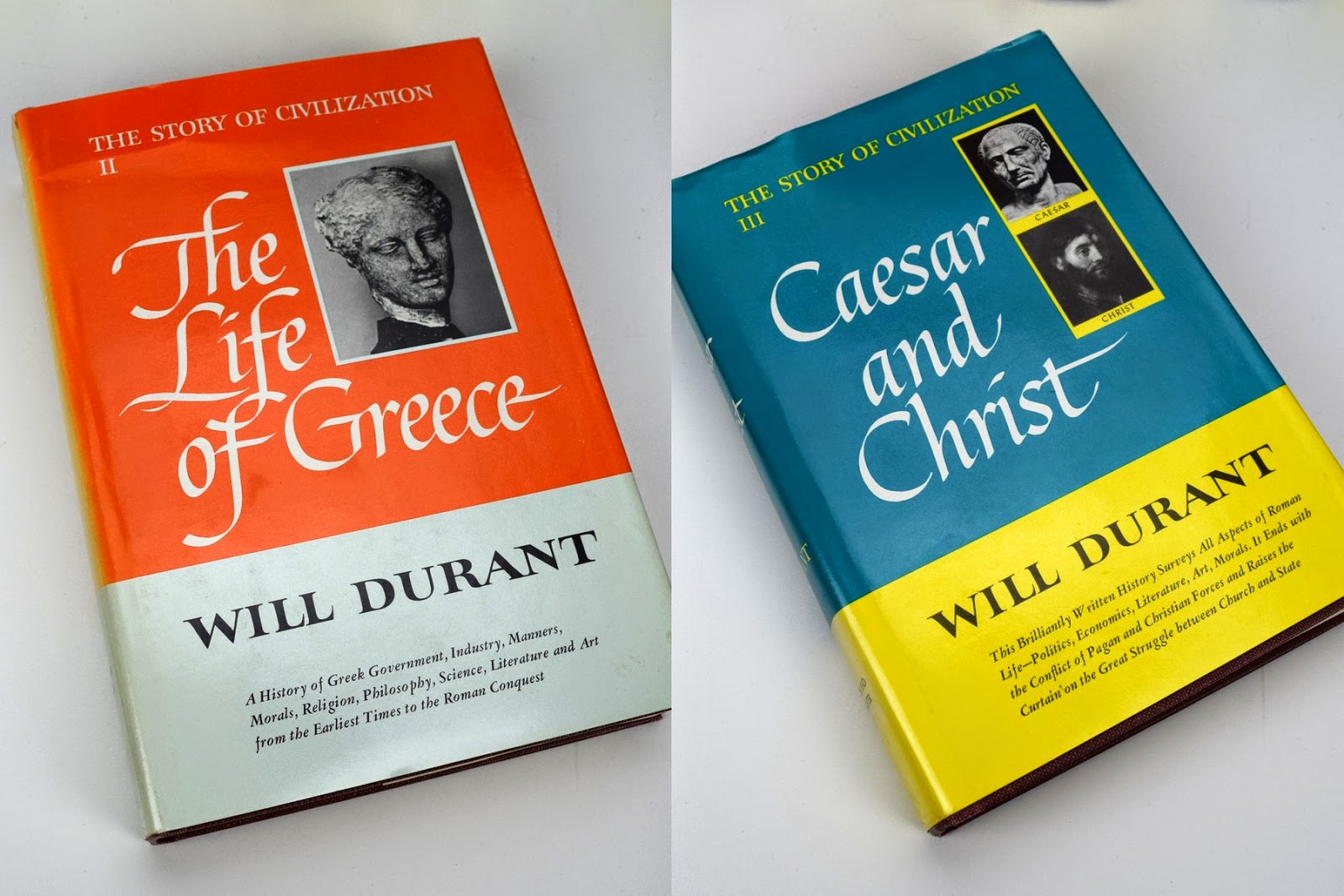 So I recognized this book set from an ebook I had purchased that was written by my friend Julia Wilkinson of the Yard Salers newsletter. It’s called Flip It Again Version 2.0: 20 Common Items You Can Sell (and Resell Again and Again) for $50 & Up! And is “107 pages of straight information and images”.
So that’s up to you. This blog has never been about pushing affiliate links just for the sake of it. I’m just saying, in the past I’ve paid for information and it’s paid off.
So far, I have the set listed on Ebay only but may try Amazon as well.

That’s my Friday Find. I hope to make this a somewhat regular feature…but you know me…no promises! lol. I’m more likely to just share as I go…but I felt in the mood for an alliteration today.
Happy hunting, happy thrifting and happy weekend! Feel free to share your best find this week in the comments.

3 thoughts on “Friday Find: Will Durant ~ The Story of Civilization 11 Volumes….and I Can Barely Write One Blog Post….”